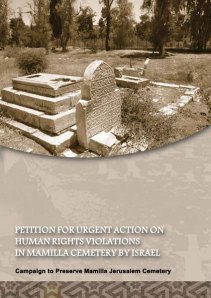 The hypocrisy, double moral standards, and refusal of the Israeli authorities to be the impartial stewards of the country’s entire cultural and religious heritage could not be clearer.   Whatever one thinks of the idea of a new “Museum of Tolerance” in Jerusalem– a city more appropriate perhaps as the home for a Museum of Intolerance– its location at the site of a historic Muslim cemetery is a sign of how utterly empty the museum’s purported message has become– and how hollow President Shimon Peres’s rhetoric of the museum offering “an eternal message of understanding, togetherness and unity” now sounds.

Despite the indefatigable PR and fund-raising efforts of Rabbi Marvin Hier, founder and “dean” of the LA-based Simon Wiesenthal Institute, the usual bombastic rhetoric of Prime Minister Netanyahu, and the support of Governor Arnold Schwarzenegger, the Jerusalem Museum plan has already acquired a bad odor as the sudden departure of celebrity architect Frank Gehry last month testifies.

The currently circulating petition to stop the desecration of the graves (in the same way that the desecration of ancient graves in Barcelona, Toledo, Tarrega, and Malta have been opposed on religious and moral grounds) should be supported by all people of good will.

One thought on “A Museum of Tolerance?”